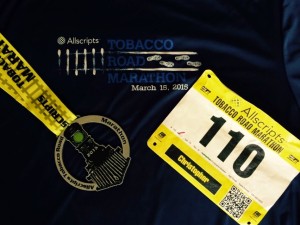 I am just over here gushing about my marathon- 10 minute PR and looking for more!

Last year I bonked horribly at the Raleigh Rock N Roll marathon- I went out pretty fast (for me), and wound up walking a ton in the second half of the marathon. Ultimately I finished around 4:37- slower than my Ironman marathon, and about 40 minutes off my first marathon result.  Honestly that was just an embarrassing result.

This time would be different… right? Wait, why would it be different? I still didn’t commit to a specific marathon training plan, and I basically put in zero speedwork.  So what was I doing?  I finished most of my long runs, including a few 16 milers and a 20 miler. I also worked in a handful of crosstraining sessions, but I can’t say they followed a strict regimen. When I had the time I would work in an hour on the bike trainer, perhaps a speed session once every one-two weeks. And I was fairly consistently… doing Bodypump?

Yeah. My training was all over the place.  And it wasn’t even my highest priority- I spent most of January & February restricting my calories to lose weight.  I went from 190 in early January to 177 on race day- and this is perhaps a big reason for my success, despite my lack of coherent training.

The weather was perfect.  Saturday’s rain cleared out by the evening; mild overnight temps bottoming at 50º meant I didn’t have to dress warmly before the gun; finally temps stayed cool enough in the 50s-60s for the morning.

I arrived at the Baseball complex around 5:45, and didn’t have too much time finding a parking spot.  I ran into one of my friends doing the half marathon, and chatted a bit before wishing her good luck with her race.  Finally around 6:35 I made my way to the starting area and found the 4:00 pace group.  I was surprised to see a 3:55 pace group, and considered sticking with that guy, but decided against it. The 4 hour group had two official pacers, including a spirited dude who asked all the people lining up with him to sign his shirt as a contract to reach the finish line under 4 hours. I was the first to sign, and I got a smile out of his energy.  By this time even my own race nerves were rising a bit- almost time to go!

My plan was to spend the first half with the 4:00 pace group, and set out for my own at the halfway point, and broadly speaking my splits reflect this.  I finished the first half in 1:58, a little bit ahead of pace. But out on the course I only stuck around with the pace group for about 4-5 miles before deciding to press on.  After leaving the group behind I maintained a ~8:50/mile pace or so for the next 13ish miles, through mile 18.

On nutrition, I planned to eat a gel every 40 minutes or so.  Until about a week before the race when I heard some podcast say “hey most people can probably eat three of these things an hour.” Which prompted me to try this strategy out for the first time… on race day.  It actually worked out fine- I mixed regular gu with a roctane (the fancy & expensive gu), and probably had one every 20-25 minutes for the first three hours.

I was surprised to see Katie and the kids cheering me on once I reached Green Level Rd.  Shortly thereafter I switched into gear and picked up the pace.  8:46/mile went down to 8:29 to 8:15 for mile 20.  I was even happier to see them again at the turnaround, and I gave the kids hugs this time.  By then I was moving.

If I’m reading my results correctly, I passed about 150 people between the halfway point and home.  And it felt like it!  I was flying, and picking people off left and right.  I reached the 3:55 pacer a little after the turnaround, and he mentioned that he was running a few minutes ahead of time.  I do remember one woman passing me around White Oak Church Rd. I gamely complimented her and continued on…  A minute later she pulled off into the parking lot- I am pretty sure she didn’t have a bib and was just out for a training run!

When I left the tobacco trail and turned onto Morrisville Parkway I was starting to feel it.  The urge to stop and rest was creeping up, while at the same time I mentally scoffed and sympathized with the folks that actually were walking in the 25th mile.  I felt like I was getting slower, but pressed on.  Finally I turned into the baseball complex and sprinted the last few hundred yards- it felt like nobody was on the course with me.  I saw my family again a little before the line, and tried to muster a wave in between arm pumps.  I crossed the line with a big smile.  I finished the marathon with the 26th and last mile my fastest, at a 7:42 pace. My second 13.1 miles was my third fastest ever(!) at around 1:50- I negative split by 10 minutes! 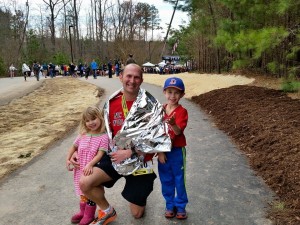 There weren’t any tears this time- just smiles.  I was happy to find my family a minute or too after collecting my solar blanket & medal.

Next month:  Charlotte Sprint Spartan Race four weeks after the marathon.  I’m excited about my first obstacle race, but I expect to do lots of burpees.

Next year: Shave 20 minutes off my marathon time, and get down to 3:30.  I think this is possible based on my results from a 5k time trial- but if I want to get faster I’ll have to be rigorous about diet and run training.  3:30 is still 20 minutes off from a BQ (“Boston Qualifying” Time), but for now that’s my next big run goal.

Originally I planned to complete an Ironman branded event in 2016, but that may change if I stick with running.

Sins of this athlete
Escape!

Deprecated: Theme without sidebar.php is deprecated since version 3.0.0 with no alternative available. Please include a sidebar.php template in your theme. in /home/boskenco/public_html/geekbyexample/wp-includes/functions.php on line 5061